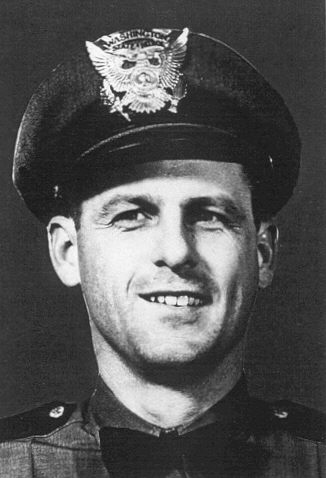 On Sunday, June 28, 1953, Patrolman John Wright of the Washington State Patrol was conducting a traffic stop on East Sprague Avenue at Barker Road in Greenacres when he was struck and killed by a drunk driver.

Patrolman Wright was talking to the violator about a speeding violation when he was struck by an Air Force enlisted man stationed at George Wright Air Force Base named Joseph C. Nolin, 20.

He was thrown 77 feet and died at the scene.

Nolin had swerved suddenly into the direction of the patrol car. After hitting Patrolman Wright’s car, Nolin’s car continued to then strike the violator’s car and the state patrolman. Nolin fled the scene in his car. The investigation showed that the cars were positioned three to four feet to the right of the shoulder of the roadway.

Three hours after the crash, while the investigation continued, Captain Chet Spencer and Patrolman Harry Stark observed Nolin’s battered car return to the scene. They stopped the car and interviewed Nolin. He admitted to drinking alcohol earlier and thought he had struck a bridge. Nolin was arrested at the scene and transported to the Spokane County Jail.

Nolin plead guilty to one charge of negligent homicide. He was sentenced to one year in jail plus two years probation.