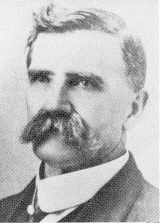 Sheriff John Wormell was shot and killed after he and a deputy responded to a report of a burglary in a store. The store owner had opened the door to the store, and along with the sheriff, entered the business. The store owner proceeded down one aisle as Wormell proceeded down the other. As Sheriff Wormell passed by a barrel, the suspect, a 12 year-old boy, hiding behind it, fired a single shot from a .32 caliber pistol he had previously stolen. The shot struck Wormell in the head, killing him instantly. The other deputy then took the boy into custody. The boy was convicted of first degree murder and sentenced to life in prison at Walla Walla State Prison. He was paroled after serving 10 years. Sheriff Wormell had served with the Asotin County Sheriff’s Department for 35 years and also served as an elected representative to the state legislature. He is survived by his wife, three sons, and daughter.