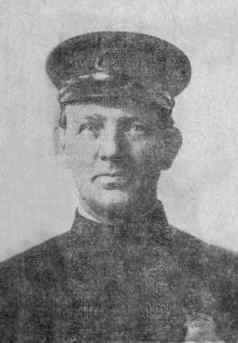 According to a statement given by Officer Wiley, he and Sgt. Weedin were off-duty and in plain clothes. After working a 12 hour shift because of a Longshoremen strike, they relaxed by attending a party together. Driving a car belonging to another Seattle police officer, Wiley was taking Weedin and some friends to the University District where Weedin lived.

In front of a warehouse at 2128 Westlake Ave., they saw two men running around in the street. Officer Wiley stopped, and went to investigate. The two men in the street told Wiley a Japanese man with a gun tried to rob them. They pointed to the suspect who was hiding in some shadows near the warehouse. As Officer Wiley walked towards the suspect, Weedin was backing the car around the corner and onto 9th Ave. Wiley approached the suspect, J. Suehiro, and identified himself as a police officer. Suehiro raised a pistol and shot Wiley in the groin. Wiley returned fire and moved towards Weedin and the car. Suehiro fired again. Sgt. Weedin was hit in the head, dying almost instantly. The suspect fell to the ground, having been hit by some of Wiley’s shots.

Officer Wiley had some citizens’ call for help. Sgt. Weedin was transported to City Hospital where he was pronounced dead. Officer Wiley and the suspect were also transported to City Hospital. The Chief of Police and the Chief of detectives interviewed the suspect. Suehiro said he had been hired as a watchman for the warehouse. He admitted shooting at the officers. He said he did not know they were officers and thought they were burglars. Suehiro died before he could undergo surgery. Officer Wiley was expected to make a full recovery. He was transferred to Providence Hospital the next day.

The investigation of the shooting raised many questions, some of which have never been answered. Burglar tools were found outside the warehouse and signs of an attempted entry to the warehouse were found near the tools. The two men Officer Wiley had seen in the street were never found or identified. Were they the people who attempted to break into the warehouse? Inside the warehouse, in a hidden sub-basement, officers found an illegal whiskey making operation. Several of the witnesses to the shooting had seen another shooter, a white male, at a corner of the warehouse. Two witnesses were certain a shot fired by the white male hit Weedin. After the shooting stopped, the white male ran across Westlake Ave. and disappeared into Denny Park. There was enough evidence to cause police to believe another person was there. That person was never identified.  The official version of the incident was that J. Suehiro shot Sgt. Weedin and Officer Wiley.

Sgt. Weedin’s funeral was held at the First Presbyterian Church on 7-30-1916. He was survived by his wife, Agnes, and eight children, four sons and four daughters.

Sgt. Weedin was born on October 13, 1870 in Bates County, MO. By 1880, the family was living in Seattle, at Salmon Bay. On February 4, 1892, he married Agnes A. Keil. John worked as a farmer and then was a teamster before he was commissioned as a Seattle police officer in 1893. He is survived by his wife and four sons and four daughters.  John Weedin’s grandson, Officer Garth Weedin, also became a police officer with the city of Seattle.