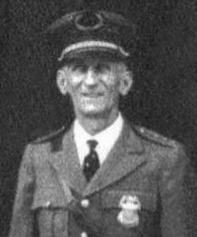 Chief Vogel was killed in an automobile accident while responding to a fire alarm. His patrol car collided with a fire truck, at an intersection, that was also responding to the call. After the initial collision Chief Vogel’s patrol car was pushed into a home. The alarm turned out to be a false alarm and had been pulled by a seven-year-old boy.