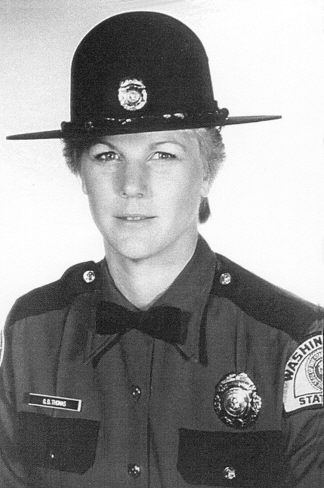 Trooper Glenda Thomas the first female Washington State Officer to be killed in the Line of Duty. Glenda was born in Pasco, Washington in 1955. She had two brothers and grew up in the Tri-Cities. She graduated from a local high school in the early 70’s and pursued a career in law enforcement in the Seattle area in the early 1980’s while raising two children.
Trooper Thomas died on May 24,1985, at the age of 29. She was killed while investigating a multi-vehicle collision on the north Seattle freeway. Trooper Thomas was standing between two vehicles at the collision scene when another car rear ended one of the vehicles involved in the earlier collision, pinning her between two automobiles. At the time of her death, Trooper Thomas had served only 6 months with the Washington State Patrol as a trooper.
Trooper Thomas’ children were raised by Glenda’s parents, Ruth and Glen. Jessica and Jason still live in the Tri-Cities area. Jason lives with his wife and their two sons. Jason is a shop manager with Irrigation Specialists in Pasco. Jessica is working in Pasco. One of her daughters is attending Western Washington University in Bellingham, graduating next spring. Jessica’s five other children live with her in Kennewick. Glenda’s parents, Glenn and Ruth passed away in 2008 and 2014, respectively.
In May of 1997, Trooper Thomas was awarded the Medal of Honor, posthumously, for her actions on May 24, 1985, by the Law Enforcement – Medal of Honor Committee.
*shared in partnership from the Washington State Patrol Memorial Foundation