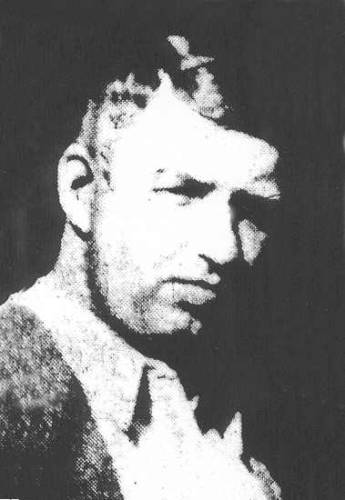 Charles S. Maskell lived at 8815 E. Roosevelt Way. On Tuesday morning, November 26, 1935, some strange noises awakened him and his wife. He looked out his window and saw a male lurking in the shadows in front of the Elk Tavern at 8904 E. Roosevelt Way. He could see the tail light of an automobile parked around the corner. At 4:50 a.m. he called the Seattle Police. SPD called the King County Sheriff. At that time, and until 1954, Seattle’s north city limit was 85th Street. Seattle police officers and King County deputies were both dispatched to the call as a burglary in progress.

Seattle police officer Trent A. Sickles, 31, and his partner, Officer Theodore E. Stevens, 35, responded to the call. A second patrol car was dispatched from the Wallingford Precinct. Sickles and Stevens arrived within a few minutes. Sickles went to the front of the tavern while Stevens checked the back. Finding the back door padlocked, Stevens joined his partner in front. They found the front door pried open. They stepped inside. Mr. Maskell then heard several gunshots. Three men ran out of the tavern. Two ran north and one ran south. Another single gunshot was heard, and one of the suspects yelled, “I’ve been hit”. Within minutes, Sgt. Martin A. Coons and Officer John H. Karlberg arrived at the scene. They saw Officer Stevens crouched by the building. He was badly wounded, but alive. Inside the tavern, they found Officer Sickles. He had been shot in the head, and was dead. A clock on the wall had been hit with buckshot and stopped at 4:55 a.m. Officer Stevens was put in Sgt. Coons patrol car and rushed to University General Hospital. Stevens was able to give a description of the suspect vehicle and a partial license number along with his account of what happened.

When the officers entered the darkened tavern, Sickles walked towards the bar while Stevens remained by the door. One of the suspects said something and shots were fired. Sickles went down immediately. Stevens was shot, but managed to return fire, two shots, before he collapsed. He had been shot in the abdomen.

At 7:30 a.m. the morning of the shooting, a milkman found two handguns on 89th St. around the corner from the tavern. The guns were eventually turned over to the police. One was a Colt .38 revolver which had been stolen from inside the tavern. The other was a .32 caliber Mauser semiautomatic.

Inside the Elk Tavern detectives found burglar tools including an electric drill. There were also slot machines on the floor. Gambling was illegal in Washington, but it was commonplace and tolerated. The original theory was the officers had been shot by a gang of safecrackers who had broken into two dozen Seattle businesses during the previous two months. But the Elk Tavern did not have a safe.

The first big break in the case came in the form of information from the Bremerton Police Chief, James W. Tribble. On January 17, 1936, detectives arrested John J. O’Donnell, 43, for questioning in the murders of Officers Sickles and Stevens. He denied any part in the crimes, and was eventually released for lack of any hard evidence. The case stalled until March 1936 when retired King County Detective William H. Sears gave Seattle detectives information he had gotten from a member of the local criminal element. The O’Donnell gang was involved in the slot machine hijacking racket. The case started coming together. At 1:00 a.m. on April 2, 1936, detectives arrested John O’Donnell and his brother-in-law, Lester A. Rorick, 25. After questioning, Rorick gave a full confession naming John O’Donnell and his brother, Joseph, as his accomplices in the murders. A warrant was issued for Joseph. He was arrested in Los Angeles and extradited to Seattle. On April 3, 1936, Prosecutor Warren G. Magnuson filed first-degree murder charges against John “Jack” O’Donnell, Joseph “Joe” O’Donnell and Lester Rorick.

Rorick told detectives they were stealing slot machines from the Elk Tavern when they saw the police car arriving. They hid in the tavern booths near the door. Rorick had a Mauser pistol in his pocket and a .38 revolver in his hand. He had found the .38 behind the bar. Joe O’Donnell had a sawed off 12 gauge shotgun, and Jack had a .45 caliber semiautomatic pistol. When the officers walked into the tavern, Joe shouted, “Stick ‘em up!” and the shooting started. When the shooting stopped, Rorick ran out of the tavern and around the corner onto 89th Street. He threw his two pistols away. When one of them hit the pavement, it discharged. The bullet hit Rorick above the right knee.

The O’Donnell’s were tried and convicted. Joe was sentenced to death. Jack was sentenced to life imprisonment. There was a separate trial for Rorick even though he had pled guilty to murder. The trial was to determine the degree of the crime. Rorick was convicted of two counts of first degree murder and sentenced to life in prison. On appeal, the Washington Supreme Court granted the O’Donnell’s a new trial. The results of that trial were the same. Jack got life imprisonment. Joe got the death penalty.

Theodore E Stevens was born in Tacoma on August 20, 1900. He was commissioned on January 1, 1929 and served the Seattle Police Department for six years. He is survived by his wife.