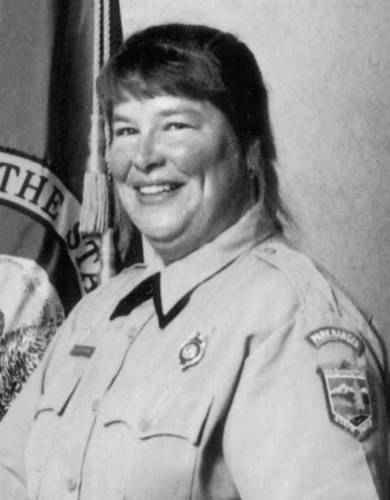 Ranger Catherine Elizabeth Secor was born in 1958 in California. She was the 4th of five siblings in an Air Force family that lived in a variety of places on the west coast. She learned to swim in Neah Bay and sail in the lakes of Little Rock. She was infamous for bringing home injured animals from the neighborhood, without telling her family, and she enjoyed playing various instruments. After graduating high school in Coronado, CA, she spent her summers as a Parks Assistant on Whidbey Island while she earned a degree in Wildlife Management from Humboldt State University.

Catherine moved to the Northwest in the early 80’s with her pet rabbit and a parakeet where she confidently moved through the ranks of the Parks Department. By the late 1990’s, Ranger Catherine E. Secor was one of the highest-ranking female Park Rangers in the State of Washington. She was the Chief Ranger and Manager of her beloved Lincoln Rock State Park where she was mentored and trained other Rangers – with particular focus on the recruitment and retention of women in the Parks Department, worked closely with Washington State Patrol and collaborated with other professionals to improve reservations and maintenance.

On Tuesday, May 9, 2000, Park Ranger Catherine Secor was riding in the backseat of a vehicle headed for the East Region Headquarters when it was sideswiped by a tractor trailer on US-97 near Blewett Pass.  The collision caused the vehicle to crash and burst into flames.  She became trapped inside and died at the scene.

Park Ranger Secor was honored with three memorials within Lincoln Rock State Park in tribute to her enduring public service and exceptional role modeling as an Area Manager.  A Western Dogwood tree is planted in remembrance, a maintenance award was established in her name and “The Catherine Secor Memorial Amphitheater” was dedicated in 2009.

Ranger Catherine E. Secor served with Washington State Parks and Recreation for 13 years. She is survived by her adoring father and stepmother and her four siblings. Her mother passed away in 2007.