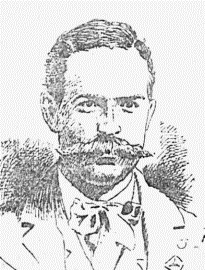 On April 10, 1898 at about 0215 hours, Officer Thomas Roberts and Officer George E. Deigh were walking a foot beat near Jefferson Street and 18th Avenue, known as the Renton Hills Addition area of the city, when they encountered two men and stopped them for questioning.

Officer Roberts had replaced his uniform with civilian clothes because of the weather.  Officer Deigh wore a Mackintosh with his star pinned to the outside along with his helmet.

One of the men that they stopped was an ex-convict named Richard Lee.  Upon questioning the men, Lee pulled a revolver and shot Officer Roberts.  Officer Deigh and Lee exchanged gunfire until both of their weapons were empty.  Lee fled on foot and Officer Deigh was wounded.

Lee fled to Lake Washington where he stole a rowboat.  He rowed to Houghton where he burglarized a house on Meydenbauer Bay.  Lee was last seen near Woodinville, but was never located.

Officer Roberts served the Seattle Police Department for four years and was with the King County Sheriff’s Office before that. He is survived by his wife and 4 children.