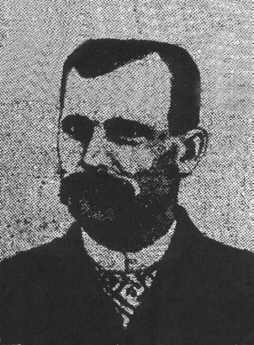 Detective Charles Raymond of the Everett Police Department was one of six officers shot and killed by an escaped inmate from Oregon who was associated with the Butch Cassidy Gang.

A manhunt for Tracy began on July 3, 1902. Tracy set up an ambush roadblock near Bothell where he shot and killed Detective Charles Raymond of the Everett Police Department and wounded Deputy Jack Williams of the King County Sheriff’s Office.  Deputy Williams died from complications related to his gunshot wounds on March 18, 1903. He also shot and killed Seattle Police Officer Enoch Breech later that day.

After leaving the shootout in Bothell, Tracy was tracked down in Seattle later in the day.  He had forced a man to drive a buggy to the northern border of Woodland Park.  Once there, he went inside the Van Horn home, located at the corner of the park.  King County Sheriff Edward Cudihee, along with the posse looking for Tracy, were given a tip from a little boy that Tracy was inside the Van Horn home.   Sheriff Cudihee, Officer Breece and Deputy Game Warden Cornelius Rawley set up on the Van Horn home, waiting for Tracy to come outside.

After about two hours, Tracy left the Van Horn home and walked toward the buggy.  There he was confronted by Officer Breece and ordered to show his hands.  Tracy quickly turned and shot Breece in the heart.  He died at the scene.  Game Warden Rawley ran towards Office Cudihee and got into a fight with Tracy before he was shot and killed.  Tracy fled the scene through the back yard of the Van Horn house on foot, escaping again.

Detective Charles Raymond served with the Everett Police Department ten years and is survived by his wife and five children.