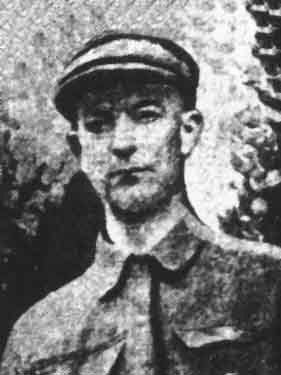 On Friday September 12, 1930, Patrolman Gene Perry of the Seattle Police Department was on regular duty, assigned to guard payroll for the cigar store inside Central Terminal Station, located near 9th and Stewart in downtown Seattle.  At about 1045 hours, Patrolman Perry was walking into the bus station with the store’s proprietor, J.W. McGinnis.  McGinnis was returning from the Seaboard branch of the First Seattle Dexter Horton National Bank with cash and checks for payroll and concessions, totaling $7,000.

Seattle Police Detective Joseph P. Smith heard the gunfire and ran to the scene.  He commandeered a private vehicle and attempted to pursue the fleeing suspects.  At the intersection of Roy and Mercer, the Studebaker stopped and the bandit got out and threatened Detective Smith saying, “Get out of here quick or I’ll drill you!”

Detective Smith turned away and later made the report at police headquarters of the suspect vehicle’s license plates.  It was determined that the plates were stolen.

Patrolman Perry was transported to City Hospital by private automobile with a collapsed lung.  On September 21, 1930 he succumbed to his wounds, suffering also from infections and pneumonia.

Officer Perry served the Seattle Police Department for eight years. He is survived by his wife and two sons.