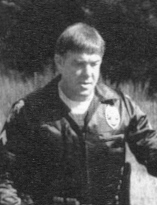 On June 8, 1987, Corporal Ron Parker of the Port of Seattle Police Department died of a heart attack following a fight with a suspect who was resisting arrest.

Corporal Parker ran a long distance inside SeaTac Airport while responding to back-up another officer in a fight with a mentally ill man.  After the officers were able to subdue the suspect, Corporal Parker suffered a heart attack.

The suspect was arrested but never charged with a crime.

Corporal Parker served the Port of Seattle Police Department for 15 years. He is survived by his daughter.