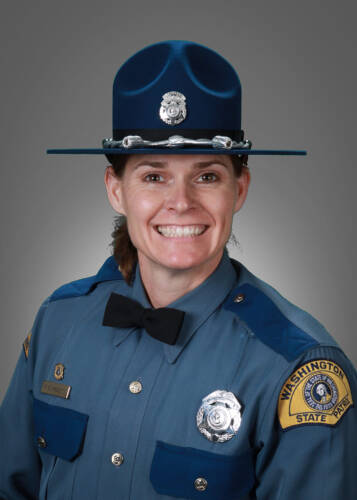 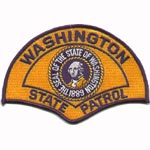 Trooper S. Renee Padgett surprised her parents by arriving early while they were on vacation in January of 1968 in Hollywood, California. The middle of three sisters, Renee grew up in a number of different cities and lived her life with a drive that few could rival. She was an avid athlete who enjoyed track and field, basketball, volleyball, drill team and competitive bodybuilding. By age 14, she set her goals on becoming a police officer.

After graduating Boise Capital High School in 1986, Renee moved to the Pacific Northwest and supported herself in various positions while she pursued her goal of becoming a Washington State Trooper. She began her career in March of 1991 as a Trooper Cadet and was commissioned in December. Trooper Padgett was assigned to the Field Operations Bureau in Bellevue, WA and in 2003 became the Wrecking Yard Trooper for King County.

Trooper Renee Padgett thrived in WSP winning numerous awards during her first 15 years including the Chief’s Award for Professional Excellence for her dedication during the investigation and prosecution of illegal wrecking yards.

While raising her young son and daughter, Trooper Padgett was also recognized for her highly visible Homeward Bound POPS Project which helped find missing children in Washington State. She received the Herman Goldstein Award for Excellence in Problem Orientating Policing (POPS) and was honored as the 2008 Commercial Vehicle Trooper of the Year.

As she continued to excel in her career, Trooper Padgett met her wife, Marcella. This new family spent their weekends camping in Cle Elum, vacationing in Hawaii or watching the Seattle Storm while Renee continued her intense fitness routine running and biking hundreds of miles each week.

In 2012, Trooper Padgett collapsed during a training exercise. After exhaustive testing, it was discovered that she had developed a rare form of blood cancer following her exposure to toxic chemicals during an investigation from 2003. A force to be reckoned with, Trooper Padgett forged ahead with a “Never Give Up” attitude.

In 2014, Trooper Padgett was awarded the Washington State Patrol’s ‘POPS Project of the Year’ for initiating Operation SAFE Student.  Renee continued to enjoy the outdoors, using her uniform as extra weight on walks when she was restricted from lifting weights and camping with her family. In November of 2017 she renewed her vows with Marcella with family and friends in attendance.

After a courageously long battle, Trooper S. Renee Padgett died on September 4th, 2018. She had served 27 years with the Washington State Patrol, a role in which she was described by those who knew her best … “It was hard to separate “Renee” from the “Trooper”.

Trooper Padgett is survived by her wife, son, daughter, mother, and two sisters.