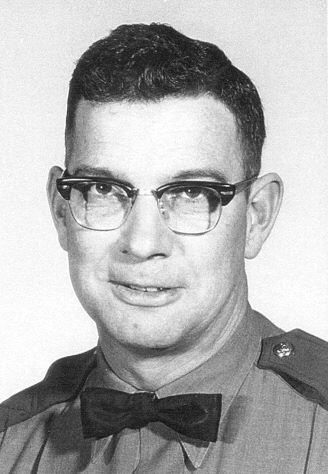 On Saturday, February 5, 1972, Washington State Patrol Trooper Frank Noble conducted a traffic stop on a vehicle near Toppenish in which the occupants, unbeknownst to the trooper, had committed an armed robbery of a convenience store earlier that day.

After contacting the driver for speeding, Trooper Noble started to return to his patrol car.  As a course of habit, Trooper Noble secured the driver’s identification between his duty belt and trouser belt as he walked back to his car.  The driver, who was a furloughed convict, suddenly exited the car and opened fire on Trooper Noble.  Trooper Noble was struck in the elbow and was knocked down.  The suspect advanced on him, shooting him once in the head, execution style.

The suspects fled the scene, but was identified by the identification card found on Trooper Noble.  The passenger in the suspect vehicle revealed the suspect’s location the next day and he was arrested.

The suspect, serving a sentence for a 1970 car theft, pleaded guilty to second degree murder and was sentenced to life on March 3, 1973.

Trooper Noble is survived by his wife and six children.