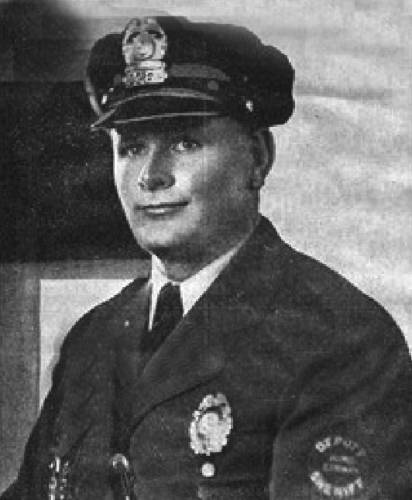 On Wednesday, November 13, 1935 at about 0300 hours, King County Deputy Thomas Meehan was found dead by a farmer near his patrol car about one-half mile north of Kent on the Old Valley Road.  Deputy Meehan, who had been on the job about eleven months, had been struck in the head by a blunt object and shot in the face.

King County Sheriff W. B. Severyns and Chief Criminal Deputy O. K. Bodia ordered deputies to round-up and shake down all known criminals and persons “whose manner of life leaves them open to suspicion.”

Several arrests were made, but no one was charged with murdering Deputy Meehan.  Latent fingerprints were found on Deputy Meehan’s leather puttee, apparently left when the killer dragged his body.  A gunny sack located near the body was traced back to a feed company near Spokane.

William Henry Wright was identified as Deputy Meehan’s killer after he died in a shootout with police in Butte, Montana on December 27, 1935.  After killing three people, including a Butte police officer, Wright took a family hostage in their home.  He released the family, who alerted police.  Wright was shot and killed by police when he attempted to escape from the house.

While holding the family hostage, he admitted to one of the hostages and a female companion that he killed Deputy Meehan after being caught stealing chickens.

Deputy Meehan served with the United States Army during World War I.