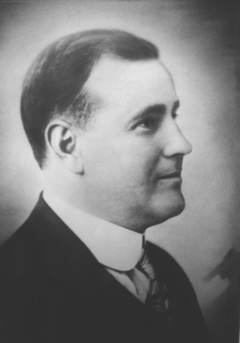 On January 21, 1921 around 8:45 p.m., two Seattle police officers were walking their beat on Broadway Ave. N. Officer William Angle, 26, and his partner, Officer Neil McMillan, 29, were experiencing a routine and uneventful shift. Neil McMillan had been commissioned as an officer just 17 days earlier, and it was his first night on the beat. Angle had just used a call box to “ring in”, something beat officers did hourly when they checked in with their precinct’s patrol clerk.

The officers were walking on the west side of Broadway and south of Mercer St. when Angle spotted John Smith. Something about Smith seemed suspicious to Angle who told his partner he was going to “shake” the guy. The officers didn’t know that Smith was a career criminal who had robbed a Spokane Bank two days earlier. As Angle approached Smith, McMillan was checking some business doors to make sure they were locked. Angle walked up to Smith and asked him where he was going. Smith pulled a Remington .380 semi-automatic pistol from his pocket and shot Angle twice. Angle went down immediately, but was able to fire two shots at Smith. McMillan had his back to his partner. When he heard the shots, he turned around and was immediately shot twice by Smith. McMillan managed to fire two shots at Smith before he went down. Smith ran across the street and into a vacant lot. There were many people walking and driving in the area who witnessed the shooting. Mr. A. Biemsals put Officer Angle in his car and drove him to City Hospital while Mr. L. C. Buchman put Officer McMillan in his car and drove him to Minor Hospital. Both officers underwent surgery.

Every available police officer in the city joined in the search for John Smith. Witnesses had provided a good description of him and his red mackinaw coat. After hearing of the shootings, about 100 irate citizens joined officers searching for Smith in the Broadway area.

Officers in downtown Seattle were searching for Smith as well. Around 10:00 p.m., Detective James O’Brien, 38, and his partner, Detective T. G Montgomery, had been walking 2nd Avenue. They stopped near the entrance to the Hoge Building at 705 2nd Avenue to talk to an acquaintance named Dean Carman. Detective O’Brien spotted a man walking towards them from the north with his hands in his pockets. He matched the description of the shooter. It was John Smith. O’Brien stepped out and stopped Smith who immediately pulled his .380 Remington from his pocket and shot Detective O’Brien who fired at least two shots at Smith before falling to the pavement. Detective Montgomery drew his revolver and fired at Smith who was hit and went down with wounds to his leg and ankle. In the exchange of gunfire, Dean Carman was shot in the leg. It was later discovered that one of Smith’s bullets had pierced the material on the side of Montgomery’s coat. Montgomery ran to aid O’Brien who said he had been hit, but he didn’t think it was bad. Montgomery then saw Smith roll over on the sidewalk. He jumped on top of Smith, and had to hit him to subdue him. Montgomery stopped a passing car, and Detective O’Brien was put in the car to be driven to the hospital. He died from his wounds. One of Smith’s bullets had hit his heart. A second pistol and 75 rounds of ammunition were found on Smith after his arrest. Detective O’Brien was survived by his widow, Mary, and four children; John, Wilford, James, and two- month old Mary.

Officer Neil McMillan died at Minor Hospital on January 24, 1921. He was unmarried.

John Smith, whose real name was Schmitt, pled guilty to murder on January 27, 1921. He stated he wanted the death penalty. A jury granted his wish. Before being transferred to Walla Walla to await execution, he admitted to another murder in Olympia. He shot and killed a man while making his escape from an armed robbery. Smith was hanged at the state penitentiary on April 1, 1921.

Neil C. McMillan was born in Hamilton, North Dakota on January 29, 1891. But, by the age of two months, his family had settled in East Lake Ainslie, Inverness, Nova Scotia. Neil served in the Canadian Armed Forces during WW I. He was a police officer with the Vancouver BC Police Department for five years before coming to Seattle. He was the second Seattle police officer to be killed in the line of duty who had previously served as a Canadian law enforcement officer. Neil worked as a streetcar motorman in Seattle before being commissioned as a police officer on January 4, 1921.  Following the funeral procession for the three officers, Neil McMillan was taken home. His body was transported by train to Orangedale, Nova Scotia.