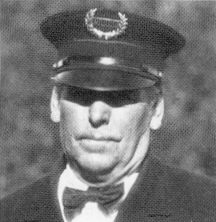 Officer Maguire was shot and killed after interrupting a burglary while checking on storage lockers at State and Whitman Streets, in Pullman. Two males were arrested in relation to the burglary, but were never charged with the murder of Maguire, due to a lack of evidence. Officer Maguire had served with the Pullman Police Department for nine years and is survived by his wife and two daughters.