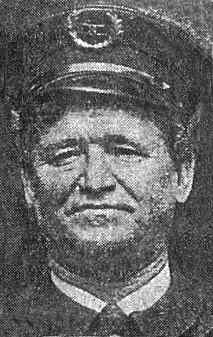 On September 25, 1924 around 6:45 a.m., Officer Robert L. Litsey, 57, was walking his beat. Ed Nickelsen, watchman for the public market at 7th and Pine, contacted the officer and told him three men had entered the rooming house at 1609 7th Avenue. The watchman thought they looked suspicious. Officer Litsey went to see what the three men were doing. As he entered the back of the rooming house, he observed a man sitting at the top of a staircase. Two other men were standing behind that subject. Officer Litsey asked the men what they were doing. One of the men drew a pistol and fired multiple shots. One bullet struck Litsey in the abdomen. Another struck him in a hand. Litsey fell to the floor. The three suspects ran down the stairs, past the officer, and out the door. Officer E. N. Johnson was nearby, and heard the shots. He saw the three suspects running. He pursued them. As the three men ran past 7th Ave. and Union St., one of them threw a .32 caliber pistol into a pile of sawdust on a truck bed. It was recovered later. Officer Johnson caught one of the suspects. He recognized him as Charles Fairchild, 25, a former school classmate. He let Fairchild go, knowing he could be found later, and went after another suspect. Johnson caught Floyd Richardson, 22, at 9th Ave. and Union St. Richardson had an empty holster on his belt. Fairchild and the third suspect, Floyd Siverly, 20, made good their escape.

Officer Litsey was taken to City Hospital. At the hospital, Litsey identified Richardson as one of the three suspects, but not the one who fired the shots. Litsey also identified Fairchild from a photo as the man who shot him. Officer Litsey underwent surgery, but he died at 8:45 p.m.

In late October 1924, Fairchild and Siverly were located in Bethany, MO where they had been captured after committing a burglary. They were extradited to Washington. All three suspects were tried for first degree murder. A jury convicted all three of manslaughter which carried a maximum 20 year sentence. The trial judge was outraged, and gave the jury a stern lecture. Richardson and Siverly were subsequently convicted of being habitual criminals.

Richardson and four other prisoners escaped from the King County Jail in 1925 before he was transferred to the Walla Walla Penitentiary. He was arrested in California for robbery and sent to Folsom Prison. In 1938, after serving his sentence in California, he was returned to Washington to start his sentence at Walla Walla. Siverly died at Walla Walla in 1929. Fairchild was paroled in 1930, and died in 1934. In 1943, the Washington Supreme Court ruled that Richardson had been improperly sentenced. As a result, his prison sentence was greatly reduced. It’s unknown what happened to Richardson after that.

Robert Lee Litsey was born on October 7, 1866 in Kentucky. In 1879, the family was living in Sedgwick, Kansas. Robert married Palma L. Shore in Sumner County, KS. The family moved to Seattle in 1889 where Robert worked as a teamster. He was commissioned as a Seattle police officer on December 16, 1902. Robert Litsey was a bit of an inventor. In 1912, he was granted US Patent No. 1,018,358 for a combination night stick/flashlight. Officer Litsey’s funeral was held at the Butterworth Chapel on September 28, 1924. He was buried at Evergreen Washelli Cemetery

Officer Litsey served the Seattle Police Department for 22 years. He is survived by his wife, Palma, and three children, sons Audrey and Robert E., and daughter Edna.