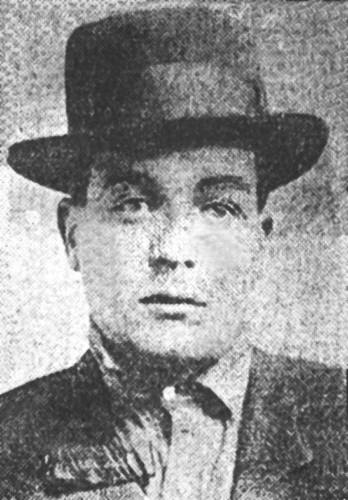 At about the same time, Officer Lawrence E. Kost, 24, was walking his beat in the area of Boren Ave. and Terrace St. He was walking with a friend, Lyle Smith. On Terrace St., between Boren and Terry, Kost found a car, a Ford, which aroused his suspicions. It was unoccupied and parked across the street from one of the call boxes in the officer’s beat. Officer Kost used the call box to contact his patrol clerk. He learned the car he was checking was Mr. Twichell’s stolen car. The patrol clerk also told Officer Kost about the armed robbery and gave him the descriptions of the three suspects.

Kost and Smith headed towards Broadway to look for the suspects. Around 11:45 p.m., Kost saw three men matching the descriptions of the robbery suspects approaching Boren and Terrace. Smith stayed back a distance while Kost approached the three men. The officer asked them where they were going as he started to search one of them. The man he was searching resisted and a struggle ensued. Either that suspect or one of the others pulled a pistol and fired one shot. The bullet hit Officer Kost in the right side at the waistline. It lodged in his spinal column. Officer Kost fell to the ground, paralyzed from the waist down. He emptied his revolver at the suspects as they ran south towards Yesler Way. Lyle Smith witnessed the encounter. He was behind a bulkhead as the suspects ran past him. Smith called the police, and the area was soon flooded with officers.

Officer Kost was unconscious when he was rushed to City Hospital. He drifted in and out of consciousness. He was able to give an account of what happened and descriptions of the three suspects. He identified a picture of George W. Gunther as one of the men he had stopped. Officer Kost died in City Hospital at 10:45 a.m. on 12-12-1915.

On January 4, 1916, Los Angeles P.D. officers arrested several suspects following an armed robbery. Los Angeles detectives were puzzled by the actions of two of the suspects, Thomas Green and James Murray. They were too anxious to plead guilty to the robbery and start serving their prison time. Detectives circulated the suspects’ pictures to west coast police departments. Later, another of the other suspects, Howard Dunnigan, decided to talk. The gang had been up and down the west coast. They had committed many robberies, including the Moline Drug Store robbery, and three murders, including the murder of Officer Kost. The gang always used a stolen car going to and from the robberies, and they only stole Fords. He told detectives the gang had committed a robbery in San Francisco in November 1915. The police had chased four suspects in their stolen car until it crashed into a wall of the Presidio. Three suspects had escaped. The fourth, Harry Wilson, had shot it out with the police. Wilson was killed, as was San Francisco P.D. Corporal Frederick Cook. The gang headed north to Seattle where they committed several robberies and murdered Officer Kost when he tried to arrest them. From Seattle, they returned to San Francisco where they murdered a citizen who caught them burglarizing the building where he lived. The gang next went to Los Angeles where they were captured.

Seattle detectives felt certain that at least two of the suspects, Thomas Green and James Murray, were involved in the murder of Officer Kost. Green and Murray were convicted of crimes in California, and both were sentenced to life in prison. Other members of the gang were sentenced to long prison terms in California, but nobody was ever tried for the murder of Officer Kost.

Lawrence Eugene Kost was born in San Francisco in 1891. The family moved to Bremerton in 1897. Lawrence grew up there, and graduated from Bremerton High School.  Lawrence worked as a machinist at the Naval Shipyard until the latter part of 1913 when he moved to Seattle. He worked as an electrician. In 1915, he worked as a yardman at the Cascade Coal Company. He was commissioned as a Seattle police officer on August 10, 1915.

Officer Lawrence Kost was unmarried. He was survived by his parents, John and Mary Kost, a sister, Louise, and a brother, Theodore. His funeral was held at the First Presbyterian Church on 12-15-1915. His mother insisted that her son be buried in his SPD uniform along with his SPD Badge #105. The Department retired his badge number. Officer Kost was buried at Woodlawn Cemetery in Ferndale.