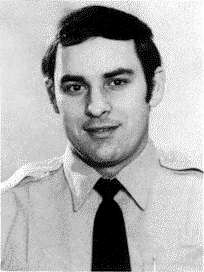 On Saturday, November 10, 1984 at about 0915 hours, Wildlife Agent Terry Hoffer and his partner, Wildlife Agent Jim Suda were patrolling in the woods near Buckley, when they attempted to contact a Jeep for a license check.

It was the first weekend of elk season and the two game wardens were on the Saint Regis Paper Property, about nine miles southeast of Buckley.

After signaling the Jeep to stop, Wildlife Agent Suda exited their Blazer patrol vehicle when a shot rang out.  The two men inside the suspect vehicle yelled that someone was shooting at them and took off.  The bullet entered the Blazer through the driver’s door and struck Wildlife Agent Hoffer.  Suda looked inside to see that his partner had been shot.  He drove Hoffer to Enumclaw Hospital where he died from a gunshot wound to his chest.

An alert witness behind the Jeep wrote down the license plate.  Pierce County deputies went to the registered owner’s house in Parkland where they arrested James Fischer and Frank McCormick the next day.  There, they located the weapon used in the shooting, an 8mm rifle.

Fischer had been attempting to unload the weapon when it discharged.  He was attempting to avoid the misdemeanor of having a loaded weapon in a vehicle.

Agent Hoffer served the Washington Department of Wildlife for seven years and had previously been an officer with another agency. He is survived by his wife and two daughters.