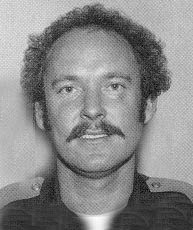 On Thursday, June 24, 1982, Detective Sergeant Sam Hicks and his partner that day, Detective Leo Hursh, of the King County Sheriff’s Office were in the area south of Flaming Geyser State Park searching for Robert Wayne Hughes.  Hughes, 29, was a suspect in a murder.

Sergeant Hicks and Detective Hursh were acting on a tip when they encountered the suspect as they were driving down a long, wooded driveway. The suspect opened fire on their patrol car with a high powered rifle. As the officers returned fire and attempted to locate cover, Sergeant Hicks was shot in the chest.

Sergeant Hicks was transported to Harborview Medical Center, where he died in surgery at 1332 hours.

A massive manhunt was undertaken for Hughes by the King County Police and surrounding agencies, to include as many as 115 police officers, state troopers and K-9’s.  The rifle was recovered a short distance away from where the gunfight took place.

Wanting to remain involved in the investigation, Detective Hursh was even allowed to participate in the manhunt.

On June 26th, following a tip from a citizen, Hughes was taken into custody without further incident.

Hughes went on trial in February 1983 and he was convicted of killing Sergeant Hicks and the attempted killing of Detective Hursh on March 12, 1983.  He had earlier plead guilty to killing of John Early.  On April 14, 1983, Hughes was sentenced to three consecutive life terms in prison.

Sergeant Hicks served the King County Sheriff’s Office for 18 years. He is survived by his wife and six children.