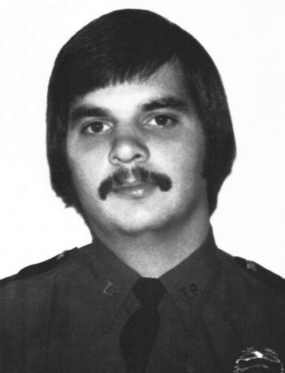 On Friday, September 9, 1977, Officer Larry Frost of the Tacoma Police Department responded with another officer to a vandalism call at the Food King, located at 3510 South 56th Street, for the report of a brick thrown through a window.

Officer Frost conducted an area check for the suspect as the other officer contacted the store for the report.  At 2043 hours, Officer Frost contacted David Ace Milford at South 64th Street and South Tacoma Way and attempted to arrest him.

Milford struck Officer Frost with his fist and knocked him to the ground.  Milford then got on top of Officer Frost and wrestled the officer’s gun from its holster.  He shot Officer Frost in the chest and neck several times before he threw the gun away, stripped his clothing and ran from the scene.

Responding officers found Milford lying naked in a parking lot in the 6600 block of South Tacoma Way feigning unconsciousness.  He was taken into custody without incident.

Officer Frost was transported to St. Joseph’s Hospital where he died.

Milford was found to be insane and was sent to a mental hospital for a short time.

Officer Frost had served with the agency for seven years. He is survived by his son and daughter.