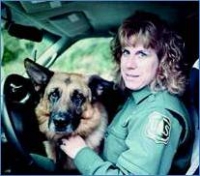 Officer Kristine M. Fairbanks was born in Michigan in 1957. Her family moved to the Olympic Peninsula when she was young and Kristine grew up in Sequim, WA with her brother. After graduating high school, she earned a degree in Geology from the University of Washington.

Kris loved the outdoors and had a passion for being a National Park Ranger where she met her future husband. They were married in 1990 and welcomed a daughter in 1993. In the years that followed, their daughter would achieve her first call sign – “591 and a half” as play on Kristine’s “591” call sign.

In the meantime, Kris transferred to the U.S. Forest Service to achieve her goals of becoming a K-9 officer. She purchased her first K-9, Ruger, and created a career training US Forest Service K-9 handlers and other agencies across the greater northwest and into Alaska.

“Friends said she had a special calling with dogs, volunteering to help 4-H students prepare for dog shows during her off days.”

Her third K-9, Radar, was with her on September 20, 2008 when Officer Fairbanks radioed in a suspicious vehicle belonging to Shawn M Roe just past Dungeness Forks Campground in the Olympic National Forest. When she did not respond to a status check, officers were dispatched to her location where she was found deceased from gun shot wounds.  Roe had fled the scene and then killed a Sequim retiree, Richard Ziegler, before being reported to authorities. When confronted, Roe opened fire on the officers and was killed in the return fire.

At the time of her death, Officer Fairbanks had been an honored and respected member of the United States Forest Service for 22 years. Radar retired and was adopted by a Port Angeles Police Officer. Kristine’s family remained active in the local community and her daughter achieved her goals of becoming Port Angeles Police Department K-9 Officer, like her mother before her.