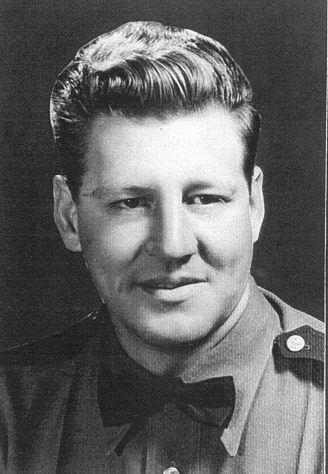 On Saturday, September 13, 1958, it was a rainy opening day of the Western Washington Fair in Puyallup.  Washington State Patrolman Ernest Eichhorn was outside the fairgrounds directing traffic after the fair had closed for the day.  He was wearing a raincoat with reflective striping and had a red traffic flashlight.

Charles Baker drove to the fairgrounds to pick up his wife from her job at the fair.  He had spent the afternoon drinking and was under the influence of alcohol as he drove toward the fair.  Baker was traveling about 30-35 miles per hour when he struck Patrolman Eichhorn in the intersection.  Patrolman Eichhorn was thrown about 30 feet, landing at the tires of another vehicle stopped at the intersection.

Patrolman Eichhorn was transported to Tacoma General Hospital with a skull fracture and compound fracture to his left leg.  He remained in a coma until he died from his injuries on September 16.

Baker was originally convicted of killing Patrolman Eichhorn; but later had the charges dismissed on appeal.

Patrolman Eichorn served the Washington State Patrol for 12 years. He is survived by his wife and four children.