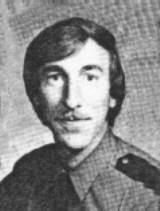 On Tuesday, April 23, 1985 at about noon, Officer Dale Eggers of the Seattle Police Department was shot and killed during a robbery of the SeaFirst Bank, located at 2555 Beacon Avenue South on Beacon Hill.

The suspect, Ray Albert Lewis, a parolee and Navy veteran, entered the bank where he passed a note to a teller, demanding money.  As Lewis left the bank, he pulled a .410 sawed-off shotgun from a briefcase and shot Officer Eggers in the head.  Officer Eggers was transported to Harborview Medical Center where he died about 45 minutes later.

Officer Eggers was working off-duty security at the bank.  He was on the phone and apparently unaware that there was a robbery in-progress before being shot.

Lewis was apprehended a couple of hours before Officer Eggers’ funeral.  He was convicted of aggravated first-degree murder and sentenced to life in prison without the possibility of parole.

In 1972, Officer Eggers was one of five officers who were wounded by a sniper at the Bush Motel at 621 South Jackson Street.

Officer Dale Eggers is survived by his daughter.