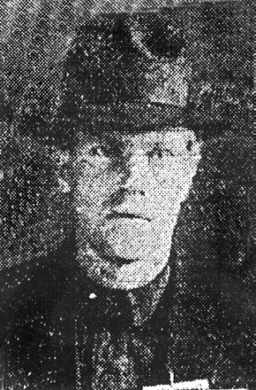 The local newspapers called it a carnival of crime, a rash of armed robberies and burglaries in the Broadway area during the early evening hours. The SPD decided to try some plain clothes patrols. On February 23, 1911 around 6:00 p.m., Officer Judson P. Davis, 31, was at police headquarters getting ready for one of those plain-clothes assignments. Davis and Officer Herbert C. Smith would be walking the Broadway area in the hope of catching some of the people responsible for the crime spree. The assignment was to end at 8:00 p.m. Davis and Smith were close friends. Smith’s wife had recently died, and he had moved in with Davis who was living at the Baxter Hotel, 518 Pike St.

Shortly after 7:00 p.m., Davis and Smith were walking north on Boylston Ave. from Olive St. They observed two men a distance ahead of them and walking north on the west side of the street. Davis and Smith thought they looked suspicious, and decided to stop them. The two officers started walking faster. They caught up with the two men mid-block between Howell and Denny on the west side of the street. When the officers were about eight feet from the two, Davis ordered them to stop and put their hands up. One suspect, John Ford, turned around with an eight shot semi-automatic pistol in his hand, and ordered the officers to put their hands up. Officer Davis reached for his revolver. Ford fired, and started moving into the street. The second suspect, Axel Nist, started running across the street with Officer Smith firing at him. One of Ford’s shots hit Officer Davis in the leg just above the ankle. Davis went down on one knee. One of Davis’s shots hit Ford, just missing the heart and lodging in his back. Ford went down in the middle of Boylston, paralyzed from the waist down. But he was able to sit up and continue firing. Officer Davis fired five shots from his six shot revolver. He had the habit of leaving one chamber empty and resting the pistol’s hammer on that empty chamber. When Davis fired his last shot, Ford had one bullet left. That bullet hit Davis in the shoulder and exited his back, severing his spinal column in the process. Officer Davis died almost instantly.

While all this was happening, Officer Smith was chasing Axel Nist. He had run across the street and into a vacant lot heading towards Denny. One of Officer Smith’s bullets hit Nist in the hip. Nist disappeared, and Officer Smith could not find him. Smith returned to where his friend and partner lay dead. He asked someone to call for assistance. Smith kept an eye on the paralyzed Ford until more officers arrived. Ford was taken to City Hospital, and he was not expected to live. About one hour later, Nist was found. While running through the darkness, he had fallen into a deep pit near Harvard Ave. and Denny. He wasn’t able to get out. He did not have a gun when arrested. He was taken to City Hospital.

The funeral for Officer Davis was held on February 26, 1911 at the Butterworth Chapel. It was filled to capacity. 500 mourners had to stand outside. After the service, there was a procession to the King Street Station. Officer Davis’s body was put on the Oriental Limited, and transported to Port Jefferson, NY. The City graciously paid the $153.30 cost for this. Judson P. Davis is buried at Union Cemetery in Suffolk County, NY. Part of the inscription on his headstone reads, “KILLED WHILE ON DUTY AS POLICEMAN IN SEATTLE, WASH. FEB. 23, 1911”.

John Ford died at City Hospital, but not before he gave a full statement confessing to the murder of Officer Davis and implicating Nist. Nist was tried and convicted for Murder 2. The Washington Supreme Court ordered a new trail. The Court ruled the trial court erred by allowing Ford’s statement implicating Nist to be introduced as evidence. At the second trial, Nist was convicted for Murder 2, and sentenced to 10-20 years in the Walla Walla Penitentiary.

Judson Percival Davis was born in Coram, NY on January 20, 1880. He was a graduate of Syracuse University, and was a school teacher for a time before enlisting in the United States Marine Corps in 1904. His assignments included the Philippines, the USS Oregon (BB-3), a battleship, and Marine Barracks, Navy Shipyard, Puget Sound. His last assignment as a Marine was in the Seattle Recruiting Office. He was honorably discharged in February 1908. He lived at 3048 W. 65th St. and worked as a laborer until he was commissioned as a Seattle police officer on January 1, 1909. He was un-married, and is survived by his brother, Harold Davis, in Coram, NY. Harold and his wife had a son born in 1919. They named him Judson P. Davis.