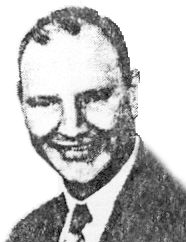 Deputy Dick Rhodes and Deputy Victor Cusworth were killed in an automobile accident at approximately 4:00 am while responding to a call of a negligent driver. They were responding down the Seattle Highway, west of Cle Elem, when their patrol car struck the rear of a slow moving hay truck.

Deputy Cusworth had served with the agency for 14 years. He was survived by his wife, son, two daughters, three brothers, and two sisters

Deputy Rhodes had served with the agency for two years. He was survived by his wife and child.