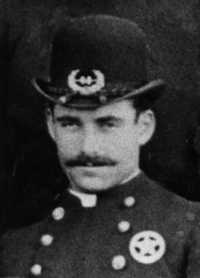 On July 30, 1892, off-duty Tacoma Police Officers Minor Cudihee and John Kenna were walking on McKinley Hill, when they encountered two men laying on the northeast corner of 35th and East “H” Street.  The two men were Delmont Borders and David Seales; both men were intoxicated.

Officer Cudihee, who was unarmed, identified himself as a police officer to the men.  He asked them what they were doing in the area and the men responded by yelling expletives.  He then ordered Borders and Seales to leave the area.

The two men then began to assault the unarmed officers.  Seales stabbed Officer Cudihee under the right arm and slashed Officer Kenna across the back of his overcoat.  Borders attacked Officer Kenna with a rock.

Borders and Seales fled the scene on foot while Officer Kenna helped Officer Cudihee to a nearby home.  Officer Kenna left the dying officer in the care of a resident while he went for help.

At about 2135 hours, the patrol wagon, which served a dual role as the city’s ambulance, was dispatched from city hall to respond to the residence where Officer Cudihee was waiting.  By the time the wagon arrived, however, Officer Cudihee had succumbed to his stab wound.

Shortly after midnight, Delmont and Seales were captured and taken to the city jail.  A lynch mob formed outside the jail, so Tacoma Police Chief Lincoln Davis moved the men to the county jail.

At trial, Seales was acquitted of all charges after 12 minutes of jury deliberation, claiming he did not remember the attack.

Officer Cudihee is survived by his parents, three brothers and four sisters.  At the age of 22, he was the youngest member of Tacoma P.D.  He served with the Department for two years.