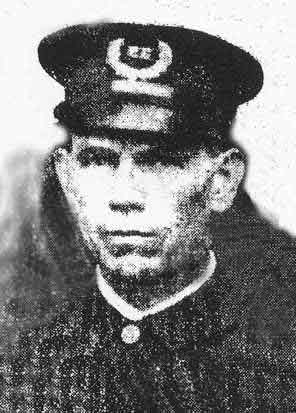 During the evening hours of Friday, July 4th, 1924, Patrolman Amos Comer responded to the Business Men’s Club, located at 614½ Jackson Street for the report of a man causing a disturbance.  Manager E.M. Martini had called police headquarters about a black male inside the club who was making comments that he’d “shoot the first guy that bothers me.”

Patrolman Comer arrived at the business and attempted to locate the man.  He searched the business while the suspect, L.E. Moseley, had gone into the basement.  After being unable to locate anyone causing a problem, Patrolman Comer went outside and stood by the front door.  Moseley then walked out of the club and Patrolman Comer confronted him as he thought he was the problem.  Moseley was known to the officer because of his previous criminal record.

It was discovered later that Moseley had telephoned Central Police Station himself and threatened to kill any man sent to take him.  This information didn’t get to Patrolman Comer.

As Patrolman Comer began searching Moseley, he produced a revolver and shot Patrolman Comer twice.  One shot grazed the officer’s wrist while the other shot entered his body under the heart.  Moseley fled the scene on foot after he tried to shoot one of the club’s proprietors who had come to aid Patrolman Comer.

The wounded officer was taken to City Hospital where he died the next night of his wounds on July 5, 1924.

Moseley was arrested at about 0200 hours on July 7th after he was located in Tacoma at a rooming house at Thirteenth Avenue and K Street.  Two revolvers were located in the room where he was staying.  When detectives entered the room, Moseley tried to get to the guns before he was tackled and taken into custody.

Patrolman Comer served the Seattle Police Department for twelve years and he is survived by his wife.