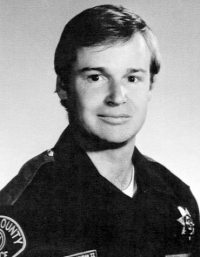 On Wednesday, May 22, 1991 at about 0715 hours, Deputy Richie Cochran was involved in a five-car collision on southbound Interstate 5 near North 117th Street in Seattle.  Deputy Cochran was struck from behind by a Snohomish County Community Transit bus.  He was thrown from his motorcycle as it was pushed into a white van.

Deputy Cochran was an experienced motorcycle rider and had recently joined the King County Sheriff’s Office Motors Unit.  He was riding to training with Deputy Zsolt Dornay.  Deputy Dornay also went down as a result of the collision, but wasn’t seriously injured.

Deputy Cochran was transported to Harborview Medical Center where he died from massive internal injuries at 0936 hours during surgery.

The North American Motor Officers Association awards the “Richie Cochran Rookie of the Year Award” at their annual symposium.

Deputy Cochran served with the King County Sheriff’s Office for seven years. He is survived by his wife, father and mother and siblings.