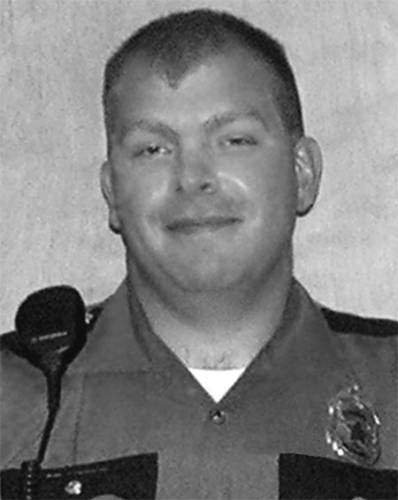 At 2206 hours, a Datsun 210 drove south on 29th, where it pulled alongside the patrol car.  Officer Sweeney sensed danger and ducked, telling Officer Brenton to do the same.  Christopher Monfort opened fire on the officers with an AR-15.  Officer Brenton was struck several times and was killed instantly.  Officer Sweeney ducked and a round grazed the back of her uniform shirt and ballistic vest.   Monfort backed northbound on 29th Avenue, turned around mid-block and fled the scene.  Officer Sweeney returned fire and radioed shots were fired with an officer down.  Within about one minute, numerous backup officers arrived at the scene.

At the conclusion of Officer Brenton’s memorial service at Key Arena, SPD Homicide detectives were following up on a tip in the city of Tukwila. The detectives confronted the person on interest as he stepped outside from his apartment. The man pulled a gun and was shot and wounded before being taken into custody.

The 41-year-old suspect was also charged with the firebombing of Seattle police vehicles at a city maintenance facility nine days earlier. On July 23, 2015, he was convicted of murder, attempted murder, and arson and sentenced to life.

Officer Brenton had served with the Seattle Police Department for nine years and previously with the La Conner Police Department. He is survived by his wife, son, and daughter; his father, mother, brother and sister.  His father and uncle are retired Seattle police officers.