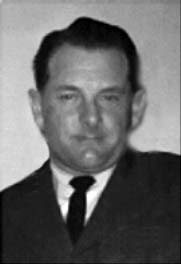 During the evening of March 7, 1968, Seattle Police Motorcycle Officer John E. Bartlett, 37, was working in an unmarked traffic car. Around 9:30 p.m., he stopped a taxi cab for speeding at Aurora N. and N. Motor Place. The traffic car was positioned in the normal manner to afford the officer protection from oncoming traffic. While Officer Bartlett was standing by the taxi, a northbound pickup truck passed the police car, and then swerved towards the officer. The truck’s outside mirror hit the officer, pushing him against the cab and throwing him about ten feet. Officer Bartlett was rushed to University Hospital with fractures and internal injuries. A call went out for blood donors. More than100 Seattle police officers and firefighters answered the call.

Officer R.T. Ballantyne located the abandoned pickup truck about one block away. He located the driver, Wayne L. Roberts, an insurance underwriter, near N. 42 St. and Whitman Ave. N. Roberts denied any knowledge of the accident. He was arrested for drunken driving,

Officer John Bartlett died at University Hospital at 4:42 p.m. on March 9, 1968. He was survived by his wife, Barbara, and his children, Bruce and Karen. He was also survived by his brother, Seattle Police Officer Bill Bartlett. Officer Bartlett’s funeral was held on March 12, 1969 at the Acacia Funeral Home Chapel. He was buried at Acacia Memorial Park.

Wayne L. Roberts was convicted of negligent homicide and hit and run. The prosecutor recommended a prison term of up to twenty years with a minimum of two years. King County Superior Court Judge Richard F. Broz sentenced Roberts to six years’ probation, court costs, and 200 hours of community service to an organization doing alcoholic rehabilitation work. Roberts was also ordered to pay $10,000 to Officer Bartlett’s widow at a rate of at least $150 per month.

John E. Bartlett was born in Seattle on January 19, 1931. He grew up in Seattle and graduated from Roosevelt High School. He worked for the railroad before enlisting in the U.S. Navy, and served during the Korean War. When he returned from Korea, he worked for Seattle Transit before joining the Seattle Fire Department. He was commissioned as a Seattle police officer on January 2, 1959. John married Barbara J. Stewart on February 11, 1955.