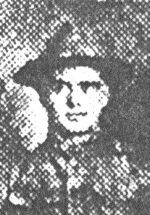 Police Officer William Angle and Police Officer Neil McMillan were shot and killed at approximately 9:00 pm by a man they suspected was carrying a weapon on Broadway Avenue, at East Harrison Street. When the officers began to search the suspect, he produced a handgun and shot both officers.

One hour later, the same suspect shot and killed Detective James O’Brien when he and his partner attempted to question him.

Officer Angle succumbed to his wounds in the early morning hours of January 22nd.

The suspect was eventually apprehended and hanged in Walla Walla Prison on April 1st, 1921.

Officer Angle had been with the Seattle Police Department for one month. He is survived by his expectant wife, Lula.