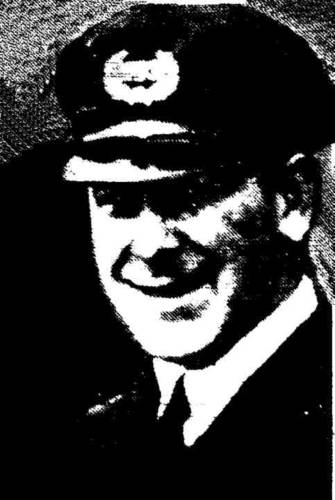 During the hours of darkness on September 9, 1932, Mr. C. R. Marquardt was driving his automobile southbound on 4th Avenue S. Marquardt stated he slowed to make a turn at S. Horton St., and that he had signaled a left turn with his arm. As Marquardt started to turn, an SPD motorcycle, driven by Officer Ralph H. Ahner, 32, crashed into the driver’s side of his car. Officer Ahner had also been southbound on 4th Avenue S. The officer was taken to Virginia Mason Hospital with multiple fractures including a skull fracture. SPD Captain Charles E. Dolphin stated Officer Ahner had been chasing a speeding car at the time of the accident. While hospitalized, Officer Ahner’s condition was improving, but it suddenly took a turn for the worse. He died at 1:00 a.m. on September 13, 1932. Officer Ahner’s funeral was held on September 15, 1932. His remains were cremated. An inquest ruled the accident was an “accidental collision while the deceased was chasing a traffic violator”. C. R. Marquardt was never charged.

Officer Ahner is survived by his widow, Florence, a stepson, Earl, and several siblings including his brother, Ted, a Seattle police officer.