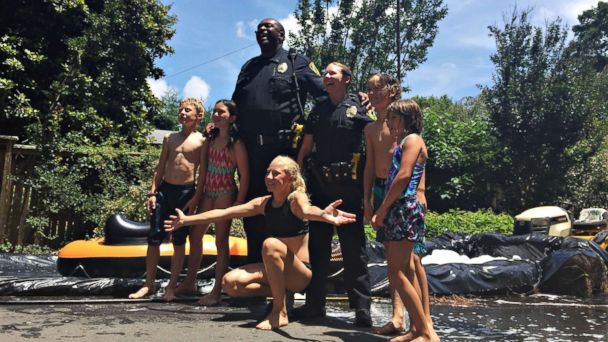 We at Behind the Badge Foundation love seeing the impact that officers have on their community all across the country!

When Asheville, North Carolina, senior police officers Joe Jones and Carrie Lee responded to a call for a noise complaint, they never expected the summertime fun they were about to encounter.

The officers joined in on the neighborhood’s massive Slip ‘N Slide built for a Fourth of July block party on Sunday, July 2.

“The officers got there and people were like, ‘Oh my gosh, the cops are here. They’re going to shut us down,’ but they noticed the noise was fine. It was literally the sound of kids playing,” public information officer Christina Hallingse told ABC News. “The Slip ‘N Slide they noticed was so far off the street that cars and emergency vehicles could still pass through so it was perfectly fine and they decided to join in on the fun. There were no citations issued.”

“They had such good energy. All the kids were loving it,” Travis Eagledove, a nearby resident who caught the epic moment on camera, said of the officers.

Officer Lee took the plunge first, sliding down the big hill with a trash bag on top of her uniform.

“When the female officer asked for a garbage bag, we almost didn’t believe it. But she took off her radio and went for it! ,” neighbor Katlen Joyce Smith wrote to ABC News. “ They told us to have a great day, posed for some pictures and thanked us for the fun!”

At the end of the now viral video, Officer Jones can be heard saying, “My butt is wet.”

“He thought he was going to away with it because he couldn’t fit in a trash bag but then a little boy ran and got a big raft,” Hallingse said with a laugh.

Little did he know that he’d also set a Slip ‘N Slide record that day.